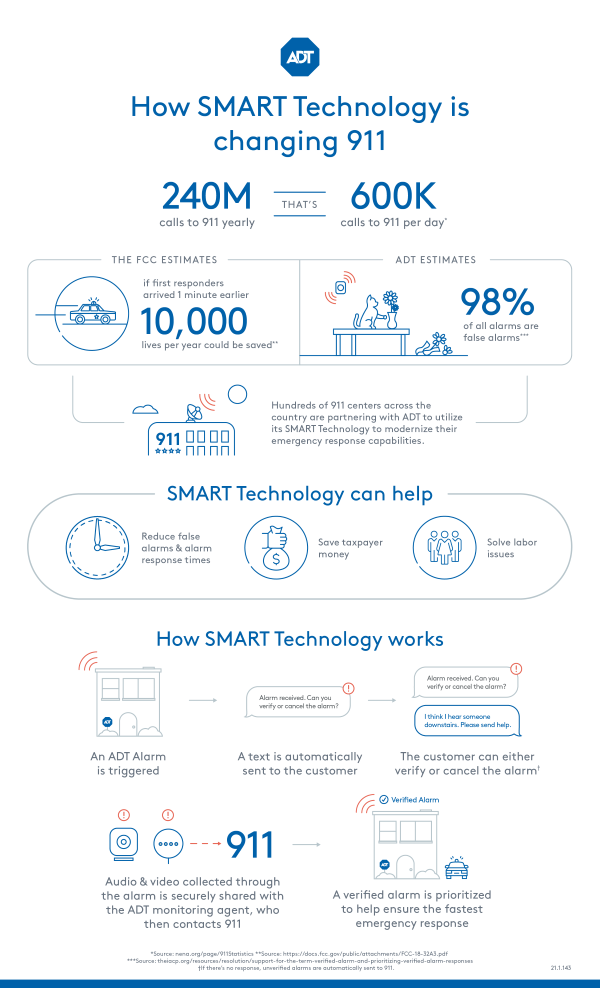 “In an emergency, customers want the right public safety agency to respond with the highest priority based on their type of emergency,” said Larry Folsom, ADT Vice President of Monitoring Technology. “They want assurance that the police car, fire truck, or ambulance is being sent to the right place, with the right information, as quickly as possible.”

Here’s the rub: For all the convenience modern smart home security technology has unlocked, the workflow of monitoring and response technology has changed very little since the 1970s. The process would go as follows: An alarm is triggered, a basic message is sent to a monitoring center, an agent calls the customer to verify the alarm, and, if no one answers or cancels the alarm, the agent calls the appropriate public-safety answering point (PSAP) – a dispatch call center such as 911 - to request assistance from first responders.

Historically, about 98 percent of alarms that ring through to dispatch are false or unverified, according to data from the International Association of Chiefs of Police. That’s partly because about 70 percent of alarm monitoring services’ verification phone calls to customers go unanswered because customers don’t recognize the caller’s phone number.

ADT is working to change this narrative with the introduction of the ADT System Monitoring and Response Technology (SMART) platform, which adapts the alarm industry to the digital era - helping to make alarm responses more effective. ADT’s SMART platform is actually several new technologies, that combined, help reduce false alarms, enable verified alarms and priority response, and dramatically increases the accuracy and speed of delivering alarm information to 911 centers.

The shift began in February 2020 when ADT launched Alarm Messenger to notify customers and their emergency contacts of burglar alarm events. When an alarm is triggered, instead of a monitoring agent calling the customer, Alarm Messenger sends the customer and their emergency contacts a link to an interactive portal via text message or email. The portal allows those who received the link the opportunity to review alarm information quickly, chat with each other, and verify or cancel the alarm with ADT directly from their phone, without the need for special software or a phone call.

In only two years, more than a million emergency alarm responses have been avoided by having ADT customers use Alarm Messenger to interact with ADT’s monitoring centers. There are now more than 3.4 million ADT customers enrolled in the service. This has reduced false alarms from these customers by 54 percent year to date.

“Alarm Messenger is running really well,” said Folsom, highlighting the reduction in calls that ADT agents place to dispatch now that people can identify false alarms with their smartphones. “But we’re most excited about the future as we will be able to get audio and video into the workflow which will help to give the customer, and potentially the dispatcher, infinitely more information about what’s going on at the alarm source.”

The video-sharing capability is scheduled to roll out this year to ADT customers who choose to opt-in to sharing data from their Google Nest cameras with Alarm Messenger. All the data that customers share with ADT is safely stored within the ADT Lockbox, an alarm event data storage service in the Google Cloud Platform. Access to the Lockbox is tracked and limited to authorized and authenticated people.

The inclusion of video data in Alarm Messenger sessions will allow customers to verify if a person is at the premises, and whether that person is known or a stranger. Video data may also reveal evidence such as a broken window, the neighbor’s cat, or smoke and fire – all types of information that can help people determine whether the situation warrants a first responder.

“Our goal is to have a two-way communication relationship using modern technologies and bring additional streams of information to our customers, our agents, and our public safety partners,” Folsom said.

Down the road, 911 call centers will be able to start using The Monitoring Association’s Alarm Validation Scoring (AVS-01) standard, a new standard for prioritizing alarms. This standard ranks the urgency of any given alarm on a sliding scale based on the contextual information about the alarm that the monitoring agents share with dispatch.

“We are able to use that standard, and ADT technology that supports it, to tell the first responders, ‘Hey, hit the gas pedal on this one because it’s a priority,’” said Don Young, ADT Chief Operating Officer.

ADT will leverage machine learning and artificial intelligence technologies to combine and process data from security cameras, audio devices, and traditional security sensors to score alarm events with the AVS-01 standard. The implementation of this standard will be a game-changer for how the security industry responds to alarm events and communicates with first responders, according to Folsom. AVS-01 is expected to launch with different levels of alarm priority based on validation of a person, threat to the property, and threat to life.

When an alarm is activated today, a monitoring company places a 10-digit telephone call to a 911 center to request an emergency response. This process can introduce transcription errors, encounter lengthy call hold times for agents, and tie up both the ADT and 911 agents among other challenges - ultimately delaying the response time to an emergency.

To address these challenges, ADT has built out services called the ADT Next Generation 911 Message Brokers, another component of the ADT SMART platform. With these services, ADT can electronically send alarm information to 911 centers without the need for a phone call. Additionally, ADT’s patented process can include a link to additional data, such as video and audio, for first responders, with the customer’s permission.

ADT’s first partner for this service is Intrado, an established 911 services company. Intrado is currently deploying this technology across the country, and it is expected to be available to three-quarters of ADT’s customers by the end of 2023.

“Our mission is better information for better choices,” Folsom said. “Electronic alarm delivery to public safety is part and parcel of permanently changing the way we empower people to protect and connect what matters most.”